A downloadable game for Windows, macOS, and Linux

Pilot a spaceship through 10 zones of randomly spawned asteroids. Use your dodge-roll maneuver to make it to the space station. Easy to pickup, difficult to master,  every movement counts!

Most ships don't have any weapons, and a single hit from an asteroid is enough to cause most ships to explode. This game focuses on defensive flying, and risk / reward maneuvers for progression.

Some ships have you commit to your velocity when using a dodge-roll, or even basic movements, whereas others give you much better handling and maneuverability, every ship is unique.

Collect the blinking crates (either one, two, or three, depending on difficulty setting) that spawn at regular intervals, in order to proceed to the next stage. If you complete stage 10 you will reach the credits.

Each ship handles very differently, changing how you approach the game.

HUD Icon in top left corner indicates when your dodge-roll, or other ability is ready to use.

You can still collect blinking crates while in a dodge-roll state.

It is currently only updated to v1.6.

Version 1.8 launched May 13th, 2022. bringing 6 new ships for a total of 12, doubling the roster again! Also including bug fixes and system improvements, details in the Devlog.

Version 2.0 is in development, and will bring a new story campaign mode.

In order to download this game you must purchase it at or above the minimum price of $3 USD. You will get access to the following files:

Support this game at or above a special price point to receive something exclusive.

Pick your own 4 color palette

Add your own 4 color palette to the game! Send me the color info and I will add it to the game. 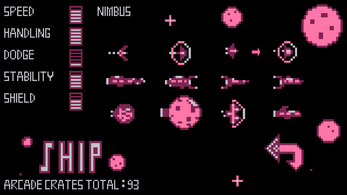 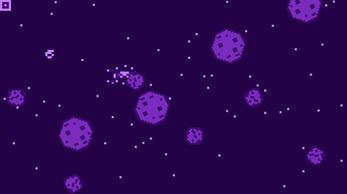